It began over 80 years ago. 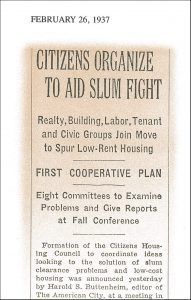 In the shorthand of newspaper headlines, the Citizens Housing Council was created to fight slums; in the longhand of history it turned out to be much more than that. CHC became a resource for the city for all housing andurban development issues. It was a unique creation, a pro bono organization composed of distinguished professionals who combined technical expertise, political savvy and social conscience.

The guiding force behind Citizens Housing Council (Planning was added to our name in 1948) was Harold S. Buttenheim, the editor and publisher of the American City, an immensely successful municipal affairs magazine. Buttenheim believed that the only way the city could address or solve its housing problems was through a broad coalition of public and private interests. To create that coalition, he called upon experts and professionals who knew how to get things done, and were committed to the city. He asked architects and real estate executives, union leaders, bankers, social activist, lawyers and academics to join the fledgling organization.

Citizens Housing’s first and highly successful effort was to press for a state constitutional amendment to enable the State of New York to become actively involved in facilitating low income housing production. The change authorized the state to borrow funds and to make loans and grants to local housing authorities for public housing and the clearance, planning and reconstruction of substandard areas. New York became the first state to provide funds to clear the slums and replace them with public housing.

Since then, we have been at the forefront of all major developments in housing and planning policy in New York City the 20th and 21st century.

CHPC has always stayed true to these roots: trusted, expert research with a civic focus and real impact. In the 1940s, CHPC argued against racial discrimination in housing; work that influenced the national Fair Housing Act. The organization’s research led to the development of the first models of subsidized rental housing in the City. In the 1970s and 1980s, CHPC was a vital resource when the City took over hundreds of thousands of abandoned buildings through in rem and needed to develop new policies and programs to bring this rental housing back into productive use.

In recent years, CHPC research projects have influenced New York State policy on the use of private activity bonds, which allowed more affordable housing to be built, and inspired zoning reform that facilitated housing production in the City’s Zoning for Quality and Affordability text amendment. A recent CHPC research initiative focused on new housing typologies, Making Room, led to significant changes to New York housing standards and inspired an innovative City pilot to develop a building of micro-units for single adults, known as Carmel Place on East 27th Street.

CHPC is always evolving to make sure our work is relevant and ahead of the curve. CHPC is a Council of leading professionals from every industry that shapes the residential built environment. CHPC shares the conviction that by working together we can promote solutions for the long-term progress of the city.