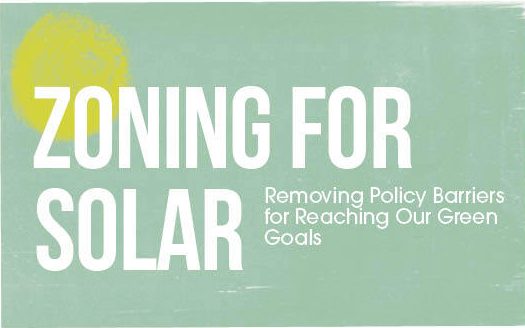 The City of New York has a goal of reducing city-wide GHG emissions by 80 percent (from 2005 levels) by 2050. However, the city is trailing far behind when it comes to solar panel installation, despite the enormous benefit of solar energy in reducing GHG emissions.  The city currently aims to install 1000 megawatts (MW) of solar technology by 2030 city-wide – expected to save the city over $70 million in annual energy costs. How can that happen?

NYC trails behind in solar panel installation, ranking just thirty-sixth in the nation among cities.

In order to reach the city’s urgent climate goals, the city must remove zoning barriers for producing solar energy. Current restrictions do not allow 100 percent solar coverage on multi-family residential buildings. This is despite the fact that 75 percent of the city’s emissions come from buildings alone.

In a new policy brief, CHPC, in partnership with the New York State Association for Affordable Housing (NYSAFAH), sets out the compelling argument for zoning reform to facilitate solar panels.

By permitting 100 percent area roof coverage for solar panels citywide, the wattage generated is expected to increase 290 percent. By increasing permitted height for solar panels from 15 feet to 20 feet, larger developments could more easily accommodate electrification technology on the busy roofs of NYC.

Reforming the zoning code to better reflect our solar needs is not new. The recently passed Special Gowanus Mixed Use District already allows for 100 percent roof coverage for solar panels with 15-foot trellises. And in 2012, with the passing of the Zone Green text amendment, the city saw solar panel capacity quadruple city-wide. However, the city is still far off from reaching its goals.

According to the NYC Climate Dashboard, the city is not on track to reach its 2030 solar goal – behind by nearly 70 MW in installation of solar panels for 2022 alone. To get on track, the city will need to think creatively and strategically to expand solar technology. That begins with zoning reform.

To learn more, explore our Zoning for Solar policy brief and take a look at the support letter signed by a coalition of designers, architects, housing policy and environmental groups in support of the zoning change.