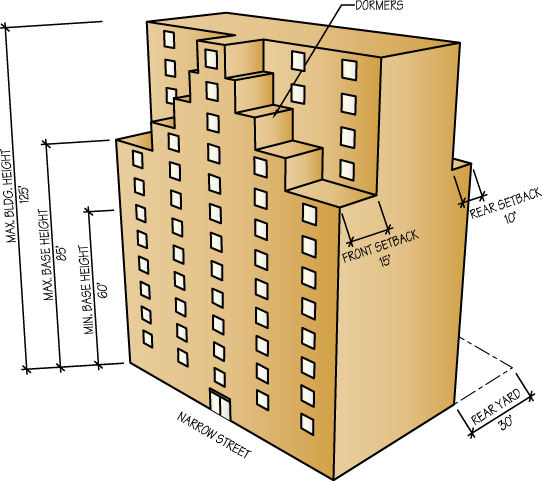 The de Blasio administration’s newly announced Housing New York plan has set many ambitious goals for the development of new housing in the city – and has acknowledged that extra floor area for residential construction will be necessary.

CHPC’s board members are on the front lines of developing affordable housing. As such, they provide valuable insights into how the city can construct more housing, and improve its design and quality.

Recently, some of our board members had begun to raise an issue they had been experiencing that was constraining residential development. The rules that define the building envelope within contextual zoning were making it difficult, sometimes impossible, to fit the allotted floor area into their building. The building envelope defines the maximum three-dimensional shape that a new building can occupy.

Our work has helped to begin a dialogue with the de Blasio administration to see how these rules, put in place decades ago, could best be changed to reflect the realities of constructing residential buildings in New York City today. We look forward to supporting their efforts at reforming these technical barriers as the Housing New York plan gets implemented.

You can read the full report on the Building Envelope Conundrum here.