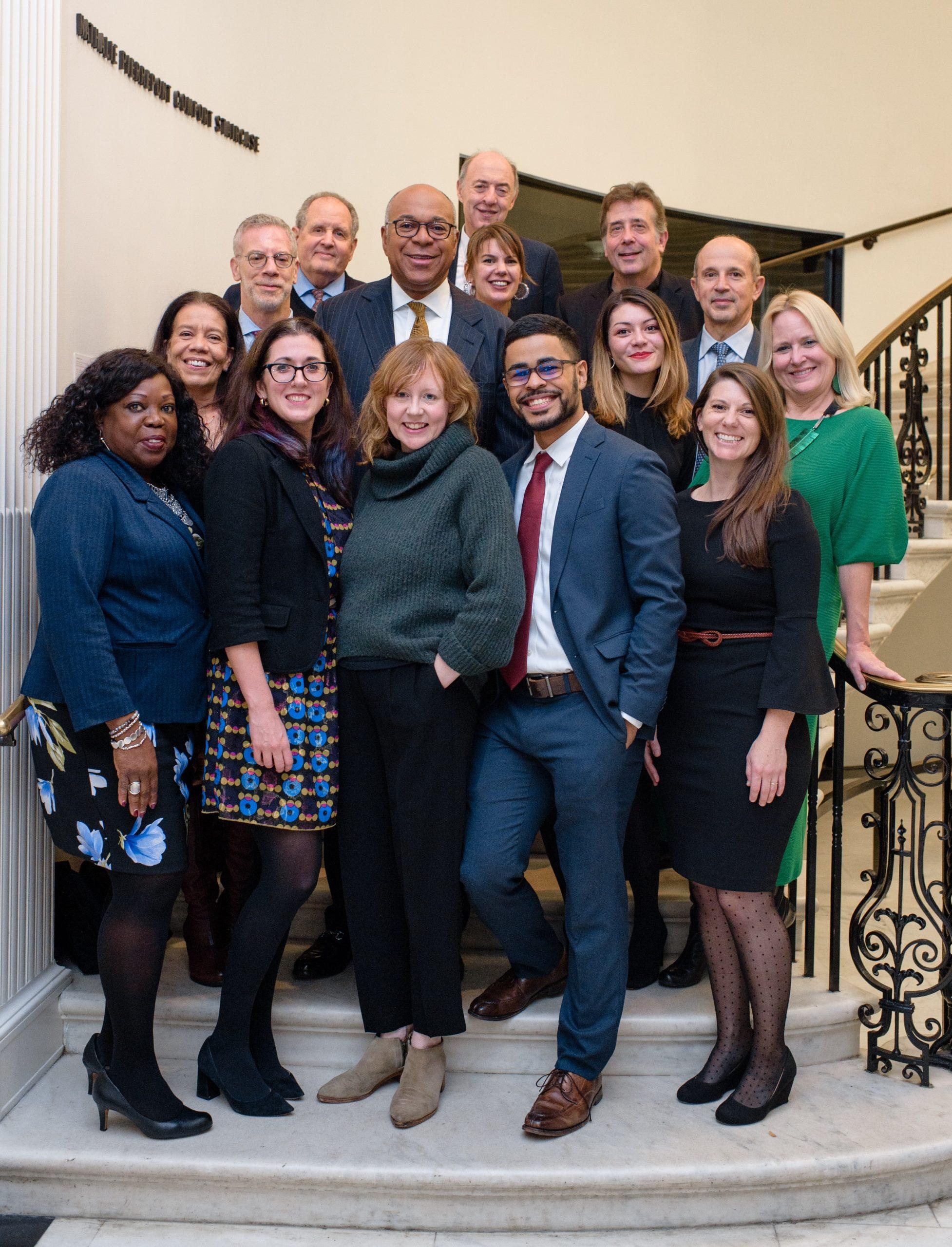 Sarah Watson is a housing professional who has built a diverse and unique career in housing policy in a wide variety of housing roles in both London and New York. In London, she worked in the development and management of affordable housing and urban renewal – specializing in using resident involvement to improve housing management policies and programs.

In New York, Sarah has worked at CHPC since 2007. She began as a Policy Analyst conducting research and analysis of NYC’s complex housing marketplace. More recently she has taken on a leadership role, devising and shaping CHPC’s research and education initiatives and ensuring they have a real impact in public policy. Sarah is the author and manager of the Making Room initiative, a new approach to housing policy that seeks to match the design of a city’s housing with the needs of its households, was the content curator for the Making Room exhibition at the Museum of the City of New York, and the new national exhibition at the National Building Museum, is responsible for the work of the Zoning Committee and many other policy projects.

As Deputy Director, Sarah also supports the Director in managing the operations and governance of CHPC. She develops and oversees the annual budget, manages the communications strategy, and develops board relations. She also supervises the overall workplan, policy staff and administrative staff, the William R Ginsberg Fellowship program, CHPC Connect, a study tour program for international visitors, and the CHPC archives and library.

Sarah is a frequent speaker, guest lecturer, and panelist and co-teaches a housing policy class at the School of International and Public Affairs at Columbia University. Sarah holds an MSc in Housing and Regeneration Policy from the London School of Economics.

Kate Leitch is a researcher and analyst, who is currently focused on advancing CHPC’s Making Room At Home initiative. Like her colleagues, she also has a hand in several other CHPC efforts, including administration of the Green Buildings Committee.

Before joining CHPC, Kate was a structural engineer who returned to school to study public policy and administration. She has extensive experience as a project manager and senior structural engineer working in a variety of cities in the US and abroad collaborating with teams including Diller Scofidio + Renfro and Daniel Liebskind.

Kate also served as a legislative aide to then Council Member Gale Brewer where she worked on a wide range of issues such as inclusionary zoning and 421-a Tax Exemptions. A published writer, an Adjunct Associate Professor at Columbia’s Graduate School of Architecture, Planning and Preservation, and active in the civic life of NYC, Kate brings a wealth of analytical and technical skills to her Fellowship position at CHPC.

Viktoria Barbaniuk is a policy analyst and researcher with prior experience in management consulting and housing policy, educated in Ukraine and the US. In Ukraine, she led a local branch of an international management consulting firm CIVITTA that works with the government and international donors to deliver reforms in Ukraine’s public sector. Before her role as the firm’s CEO, Viktoria was a senior analyst and project manager leading research projects in transportation and waste management.

Viktoria was a William R Ginsberg Research fellow at CHCP from the summer of 2018 to the spring of 2019. During her time at CHPC, she analyzed best practices for designing and operating shared housing (Making Shared Housing Work guide) and helped organize study trips for international visitors.

Before coming to New York for her graduate studies, Viktoria led the recruitment and selection process of the pioneer cohort of Teach For Ukraine fellows, worked with the international cooperation programs at Ukraine’s Ministry of Finance, and organized international conferences for Ukraine’s English-language newspaper Kyiv Post. Viktoria is an alumna of the Canada-Ukraine Parliamentary Program where she interned at Canada’s House of Commons and prepared research materials for the Committee on Citizenship and Immigration in the wake of the Syrian refugee crisis.

Viktoria holds a Bachelor’s degree in International Relations from the Taras Shevchenko National University of Kyiv, Ukraine, and a Master of Public Administration from Columbia University’s School of International and Public Affairs. It was at Columbia that she developed her passion for housing and New York City’s vibrant neighborhoods when she took a housing policy class taught by CHPC’s former Executive Director Jerilyn Perine and Deputy Director Sarah Watson.

In her spare time, Viktoria also works on developing sustainable solutions for the reconstruction of housing and renewal of the housing policy in Ukraine.

Madelaine Britt is a policy analyst and researcher with a background in neighborhood development, food systems planning and housing policy. She joins CHPC from the NYU Furman Center where she was a graduate researcher. There, she authored a comprehensive case study on the intersection of environmental health and housing policy. Before Furman, she was the Manhattan Borough Planner at the Neighborhood Development Division of the New York City Department of Small Business Services. In this role, she oversaw the Neighborhood 360 grant in Upper Manhattan, developing placemaking and small business programming in partnership with community leaders in East Harlem, Washington Heights and Inwood.

Madelaine is passionate about housing policy that empowers tenants and secures the right to healthy, affordable housing for all. She has a B.A. in Environmental Design from the School of Architecture and Planning at the University at Buffalo (SUNY) and is currently pursuing her Masters in Urban Planning at the Robert Wagner School of Public Service at NYU. Outside of work you can find her lounging in Prospect Park with a book or tracking down the best breakfast sandwich in the city.

Wideleine Desir joins CHPC as a policy analyst and urban planner with experience in community engagement, green and open space advocacy, alternative transportation, and public housing.  Before joining CHPC, Wideleine was a Community Planner at the New York City Housing Authority’s (NYCHA) Real Estate Development Department, where she managed the resident engagement and pre-development phase of multiple NYCHA PACT sites across the five boroughs. Wideleine has also worked as a Planning Fellow at New Yorkers for Parks, advocating on behalf of open and green space issues throughout New York City. Her prior roles also include developing community groups to support and maintain neighborhood parks in the Bronx and managing a multi-agency alternative transportation community engagement initiative in Austin, Texas.

As a holistic urban planner, Wideleine works to create better neighborhoods by centering the voices and experiences of different types of residents through deep community engagement. She has a B.S. in Sociology from Florida International University and an M.S. in Community and Regional Planning from the University of Texas at Austin.

During her free time, Wideleine enjoys volunteering in her community, walking her dog, and window shopping for homes online (backyard space is a must have).

Camille MacLean is a policy analyst and researcher with experience in community engagement, data analysis, and field investigations. Prior to joining CHPC, Camille was a Compliance Monitoring and Reporting Specialist at the New York City Housing Authority (NYCHA), where she conducted on-site inspections and staff interviews at NYCHA properties, prepared evaluation reports to analyze administrative and operational performance, and recommended corrective actions for observed deficiencies. While at NYCHA, Camille also developed models to guide virtual evaluation of at-risk developments, and managed reporting of lead-based paint testing and remediation to assess compliance with the obligations set in NYCHA’s Lead Action Plan.

Camille attributes her passion for housing policy to her experiences as a Youth Program Coordinator at affordable housing properties in her hometown of Portland, Oregon. She believes that protecting and expanding affordable, equitable housing sits at the core of most, if not all, major policy decisions.

Camille holds a B.A. in Public Policy from NYU and is currently pursuing her Masters in Urban Planning (MUP) at the NYU Robert F. Wagner School of Public Service.

Vivienne has come to us from the Brooklyn Chamber of Commerce where she handled membership recruitment and communication, event planning, was the office liaison for the MWBE program, and managed a variety of administrative tasks. She has also applied her considerable organizational skills in her spare time, to a variety of community efforts including coaching tennis to young people and is a member of the Caribbean American Heritage Committee which recognizes the contribution of members of the Caribbean community in NYC.

At CHPC, Vivienne is responsible for managing our database of funders, maintaining the collection in the Marian Sameth and Ruth Dickler Archival Library, acting as CHPC’s point of contact for the public, managing on site logistics for our events, and maintaining communication with CHPC’s Board of Directors.

Vivienne is an avid tennis player who attends the US Open each year. She can be found most Saturdays teaching the sport to young players at the Lincoln Terrace Tennis Club in Brooklyn.

Harold Shultz is an attorney who served in New York City government for more than 30 years and specialized in policy and legal affairs particularly in regard to housing preservation, community development, Code Enforcement, and homelessness. As Special Counsel at the New York City Department of Housing Preservation and Development, Harold was responsible for federal policy issues and was instrumental in the creation of the Third Party Transfer Program and the revised in rem legislation, the negotiation of the 203(k) settlement with HUD, local legislation regarding lead paint in residential housing, the redevelopment of Noble Drew Ali Plaza in Brooklyn and restructuring Code Enforcement. In addition, he oversaw the agency’s computer technology and the production of the Housing and Vacancy Survey.

He is well known for his extensive legal knowledge, his understanding of a troubled housing market, his pioneering work to preserve New York City’s Single Room occupancy housing stock, and his efforts to improve conditions for tenants in the City’s aging housing stock. For CHPC, he has written extensively on topics ranging from affordable housing finance to explaining lead paint rules to recommending new methods to collect water liens. Currently he is working to develop effective solutions for New York City’s over mortgaged rental housing. Harold is also currently the President of Neighborhood Restore; a non-profit organization that administers the Third Party Transfer Program.