Life of a Building

CHPC is proud to present “Life of a Building”, an online educational game showing the challenges of keeping an old rental building in good financial and physical health. Play the game and see if you can make it to 15 years! 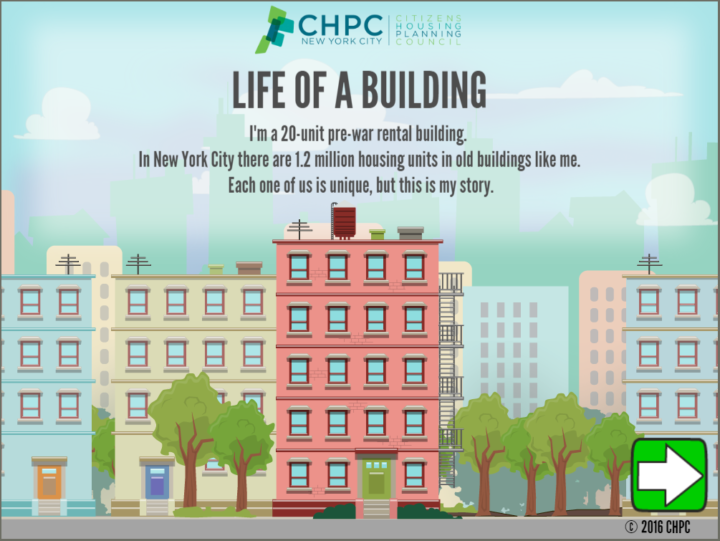 Whether you won or you lost at Life of a Building, you just experienced some of the real-life challenges facing old rental buildings in New York City!

Prewar, multifamily rental buildings like the one in the game contain 1.2 million housing units which will house the majority of New Yorkers for the foreseeable future. However, the focus of policy efforts and media attention is more often new development.

CHPC designed Life of a Building as a learning tool to raise awareness about the importance of maintaining our existing housing stock and the difficulties of running an old rental building successfully. As you have seen in the game, it is a daunting task which requires financial know-how and attentive management.

Every time you play you will face different challenges, and –as in real life– your choices will affect what happens to the building years down the road. So play again and share the game with your friends!

A NOTE ABOUT THE STORY-TELLING

Discussions about housing policy in New York City often pit landlords versus tenants and it can be difficult to engage in the topic without taking sides.

Life of a Building puts the building at the center of the game. It is the building –not the owner or the tenants– that seeks the player’s guidance in order to make it through the cycle of the game. As you play, you may even encounter that there is tenant turnover or that the building is sold to a new owner.

There are endless scenarios that we could have presented in the game. We could not include them all, so we chose a sample of events that illustrate the fine balance required to retain tenants, conduct repairs and maintenance, and abide by government regulation –all while keeping the building financially sustainable, physically sound, and desirable for residents.

CHPC conducted extensive research into the challenges of owning and managing old rental buildings in New York City. We talked to for-profit and non-profit owners, property managers, lenders, underwriters, government officials and advocacy groups to pinpoint the most important issues old rental buildings face in different neighborhoods of the city. The events you will encounter in Life of a Building are representative of the main themes we heard during our interviews.

At every turn in the game, the building’s financial health will improve or deteriorate based on the choices you make. The game also measures the physical health and the social health of the building, which indicate whether the building is in a state of good repair and whether the residents are satisfied and happy to live there, respectively.

The physical and social health of the building are important for story-telling purposes: successful buildings must be financially sustainable, but they must also be kept in good repair and aspire to be places where residents can live fulfilling lives. We did not want players to succeed in the game by skimping on maintenance or ignoring residents’ needs –even if doing so allowed them to be financially healthy. Introducing physical and social health into the game allowed us to address this.

For each health category we developed an underlying score (the dials in the game reflect this score) ranging from 0 to 10. If any of the three scores falls to 0 the player loses the game. Upon making it successfully through 15 turns, representing 15 years, a final score is calculated averaging all three scores over the 15 turns. This average score is designed to value consistency over time, rather than a quick improvement towards the end of the game.

The game begins with given financial, physical and social health scores which vary according to the selected level of difficulty. For every choice the player makes in the game there is a corresponding impact to those scores.

The financial score takes into account the debt coverage ratio (how much income is available, after expenses, to make debt payments) and the reserves available (money that has been set aside from operations and can be used to do work in the building). It is calculated as follows:

The building’s physical and social health scores were harder to determine since these categories are more subjective. However, our conversations with property managers and owners allowed us to understand how different decisions could affect those scores and to make a determination about them.

The difficulty levels and initial assumptions

At the start of the game the building operates with positive cash flow and is able to pay expenses, taxes, and debt service. However the starting operating budget varies according to the difficulty level selected.

To build the operating budgets for the three difficulty levels in Life of a Building we made assumptions about the building’s income, vacancy rate, and expenses. We thoroughly vetted our assumptions with industry practitioners, and although they do not represent any particular building they are realistic for a 20-unit pre-war walk-up building like the one in the game.

The game also starts by assuming that the building has a mortgage with 15 years remaining. The initial debt service is calculated using a 1.2 debt coverage ratio, and the resulting payment is used going forward unless an event occurs that causes to refinance the debt outstanding.

You can click here to view the initial assumptions used in the game.

The game is played for 15 turns, unless the player loses before then. Each turn represents one year (15 years is a common period used in housing finance).

After every turn the player can view a summary of the building’s budget to see the income, expenses, debt and reserves.

Events appear randomly throughout the game so that every time you play you will be challenged with a different sequence of scenarios.

Life of a Building was created by CHPC and developed by Sudden Industries. It was made possible thanks to a grant from JPMorgan Chase & Co. It can be played at www.lifeofabuilding.nyc.