CHPC is thrilled to release Inside the Rent, a new web-based game for desktops and mobile devices that allows users to explore why rents in New York City are so high. The game is designed to raise the player’s awareness about the challenges of building new rental housing without government intervention. With the imminent expiration of the 421-a property tax abatement legislation, questions about the cost of rental housing and the impact of tax abatements and other government subsidies are more relevant than ever.

Inside the Rent gives players a first-person experience of building new rental housing. The game starts by prompting the player to choose a neighborhood to build in and then select a target rent for an 800 square foot, two-bedroom apartment. The player then makes a series of make or break choices which affect how much the rent actually needs to be for the building to be financially sustainable through its first year. 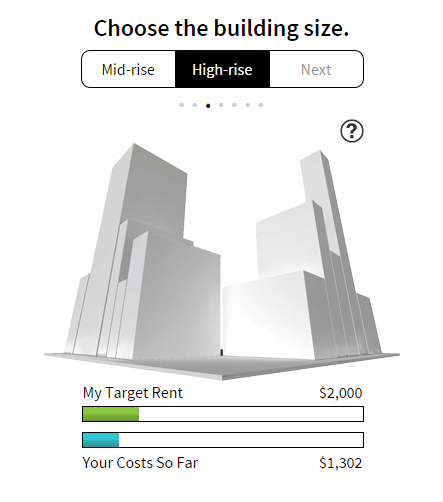 Different policy debates come into play throughout the game and the player is tasked with making choices that will affect the final rent –for instance build in high-cost neighborhoods, pay workers prevailing wages, expend public money to subsidize the building, or to give in and accept higher rents than desired.For example, the player will see that the minimum rent needed to build in the Lower East Side is $6,163.95, but a similar building in Morrisania will require a rent of $3,043.19.

If the minimum rent needed to cover the resulting construction and operating costs is higher than the target rent, the player can then choose to either accept the higher rent or turn to government subsidies. The player is encouraged to remember, though, that subsidies are limited and come at the expense of the taxpayer. 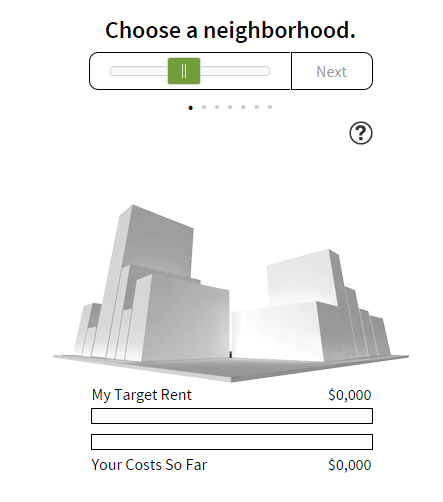 The game operates on a simplified development budget that takes into account the total development costs of constructing the building and its first year of operations. For each choice the player makes, an assumption about the associated cost is used to calculate the rent required to cover the costs. Assumptions about soft costs, yield on cost, property taxes, and vacancy are also used in the calculation. These assumptions were the result of extensive conversations with appraisers, developers, architects, and underwriters and are explained in detail here.