As the Obama Administration’s 2012 budget proposal shows, we have entered a new period of budget restraint which will impact heavily on federal housing programs. There seems to be general agreement that housing programs will be contained, controlled, and cut back. In fact the Administration’s proposal looks like the best possible outcome in the current budget atmosphere, certainly when compared to the cuts passed last week by the House for the 2011 budget. These will have important impacts around the country, but New York City, with the most aggressive housing program in the country, stands to suffer serious consequences.

The Administration’s proposed cuts are substantial: $798 million (16.8%) for the public housing operating fund, $70 million (2.8%) in the public housing capital fund, $299 million (7.5%) in the Community Development Block Grant Program (CDBG), and $175 million (9.6%) in the HOME program. The effect of these cuts will be compounded by the fact that in 2012 the American Reinvestment and Recovery Act funding (a.k.a. “stimulus”) will end, cutting funds to a number of housing programs.

The House budget proposal goes much further. Though just dealing with the 2011 budget for now, the House has effectively ended CDBG (66% cut for the remainder of 2011), cut the public housing capital fund nearly in half (42.6% cut for 2011), ended HOPE VI, and imposed an 8.7% cut on HOME. The House action also immediately rescinds any remaining stimulus funds still unspent. House leaders are proposing that the 2012 budget zero out CDBG, effectively ending the 37 year old program.

More than most people realize, New York City’s Department of Housing Preservation and Development (HPD) is an agency that channels federal funds to New York City communities. Chart 1 shows the sources of funding for HPD’s expense budget. Between CDBG, Section 8 Vouchers, and HOME grant funding, about 83.3% of HPD’s expense budget funding comes from the federal government. As you can see, much of this funding consists of Section 8 rental assistance which flows through HPD to tenants receiving the subsidy. 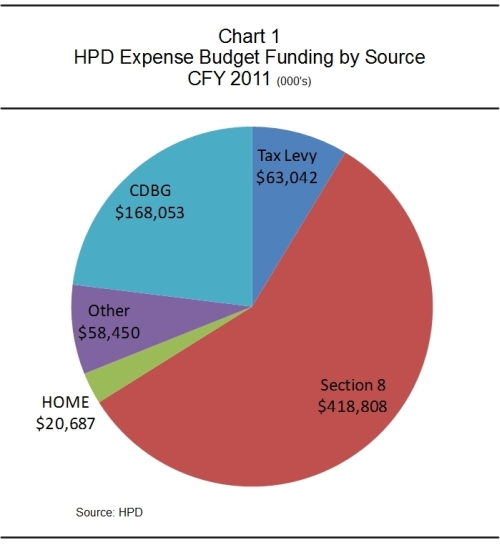 Of these programs, CDBG is the most flexible and funds the most diverse uses in HPD and the City. Created in 1974, CDBG allows grantees to use their funds for a wide variety of program and capital uses. CDBG can be used for bricks and mortar construction, to provide services and to hire employees. Thirty seven years after its creation CDBG funding is a key component of HPD’s funding and almost all of the funding for its code enforcement programs.

If we assume that the House proposal does not become law and the Administration’s proposed 7.5% budget for CDBG goes through, the City could expect that its annual federal allocation of about $195 million would be cut by 7.5%. This would amount to a “best case” loss of about $14.6 million. In the process of negotiation with the House this cut could yet grow bigger. Of course if the House succeeds in ending CDBG, the City would suffer a complete loss of  CDBG funding.

CDBG in the NYC Budget

CDBG funding has been an important part of the NYC budget since the creation of the program in 1974. While focused on housing and community development, CDBG funding has been remarkably flexible. Currently it is used in the City to fund a wide range of programs, including economic development, criminal justice, parks, and education. In Chart 2 we show the different types of uses to which CDBG funds are put in the City. Housing programs are the primary user of CDBG, but it has been put to work in programs as varied as economic development and to fund planning staff at HPD and at the City Planning Commission. 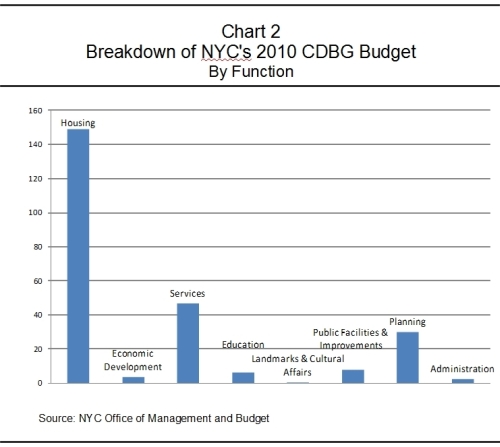 However as we can see HPD and its housing programs get about $168 million, the lion’s share of CDBG money in the City. HPD thus is uniquely sensitive to cuts in CDBG. While Chart 1 suggests that CDBG is only about 23.1% of HPD’s expense budget, Chart 3 tells a different story. Since CDBG is well suited for use to pay personnel, it has been concentrated in programs that are heavily dependent on personnel, like code enforcement inspectors.  Thus it currently pays for 1,190 staff positions -nearly half of HPD’s staff (46.5%) (see Chart 3). 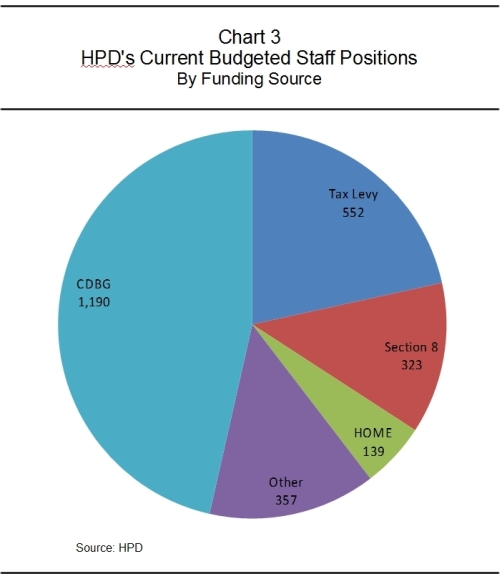 If we take the Administration’s proposed $14.6 million cut in NYC’s CDBG allocation and prorate it proportionally over the City’s programs, then HPD could expect to take an overall cut of about $9.7 million in its CDBG funds. In terms of staff, this would translate into approximately 72 positions. As Chart 4 shows, HPD has the overwhelming majority of its CDBG funded staff in the Office of Enforcement and Neighborhood Services (ENS). ENS staff includes code inspectors, litigation, the lead program, and the emergency repair program. In addition, $13 million of ERP repairs are funded by CDBG. 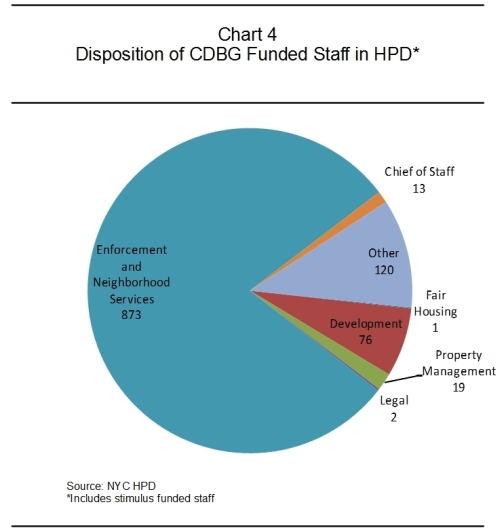 Worse yet, Fiscal Year 2012 sees the disappearance of funds under the American Recovery and Reinvestment Act of 2009 (a/k/a “stimulus”). Specifically for HPD this means the loss of about $12.25 million that had been utilized in emergency repair and another $1.1 million in demolition (the program in which the City demolishes unsafe buildings). Thus there is a $13.3 million hole in code enforcement related programs even before there are CDBG or other cuts.
With the loss of both stimulus and CDBG funding HPD is facing the loss of:

Unfortunately losses of that magnitude are now appearing to be the best case situation. The more devastating possibility is that Republicans in the House actually succeed in ending CDBG entirely. Should that happen HPD would be faced with the sudden need to replace the funding for about half of its entire staff, plus finding new funding for its entire code enforcement program, among other problems. Finding $168 million in other city funds to replace the missing CDBG money will not be easy. While it seems unlikely that the Senate will go along with the House’s proposed cuts, the likely final resolution would seem to be a CDBG budget that is less than the Administration’s proposal.

With much fanfare, HPD and the Mayor have recently announced their new Proactive Enforcement program, designed to identify and treat problem buildings. City Council legislation has tightened up and expanded the Alternative Enforcement Program. There is general agreement that the City’s housing stock faces a major risk from the more than 100,000 units of over leveraged housing that still hangs over our affordable housing market. Neutral observers, advocates, and city officials agree that enforcement of the code and addressing problem buildings is a priority.

However at this very moment of concern and consensus, the necessary tools to achieve these objectives are at risk.

Despite the fact that some cuts appear inevitable, everything should be done to protect as much of HPD’s capabilities currently funded by the CDBG budget as possible.
First, congressional representatives should be made aware of what is at stake in the CDBG budget  fight. Every effort should be made to forestall and minimize these reductions to CDBG.

Second, the City should make every effort to fill the gaps in the HPD budget that will occur from whatever cuts are enacted. Enforcement programs should receive special consideration in the upcoming city budget process.

You can view the pdf below: