CHPC Testifies in Favor of adAPT

On Wednesday July 24, CHPC testified in favor of the Mayor’s adAPT micro-unit pilot project at the City Planning Commission hearing.

As well as listening to our full testimony, which you can read below, the Commission asked CHPC to send them some basic data on the breakdown of current single person households in Manhattan (currently 46% of all Manhattan households) which we were happy to do!

Using the latest American Community Survey, we analysed the age, income, and occupancy length of individuals currently living alone. If we look at the households themselves (rather than median values), their diversity is revealed:

We were delighted to be able to speak in favor of this exciting project, and to add more statistical detail to the topic for the City Planning Commission.

We firmly believe that we need more housing options for individuals who live alone, in order to redress an extreme mismatch between need and demand. Without any action, this unmet demand is causing all sorts of dysfunction in the housing market including inflating the market price of studio apartments in Manhattan. 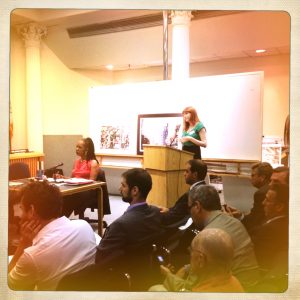 Testimony on the adAPT pilot project

For the last 5 years, we have been running a research initiative called Making Room that was inspired by the huge population increases projected in PlaNYC. Making Room has been focused on scrutinizing how our households are really living today, looking at their lifestyles and how they are grouping themselves together, and coming up with new ideas for how our housing stock can better accommodate these evolving arrangements, as well as the extreme increase in the city’s population.

There are two main results of our analysis in particular that make us huge supporters of this adAPT pilot project:

Through our Making Room project, we have been able to also follow the extraordinary growth of this phenomenon in cities all over the world. San Francisco, Boston, Seattle, Barcelona, London, Paris are all experiencing almost majority single person households, and are all grappling with how to respond to this overwhelming need.

And proposing small studio apartments in denser buildings is the logical response.

We have a Making Room exhibition right now at the Museum of the City of New York which has shown us how much international interest and attention there is around the concept of micro-housing. The exhibit has had 100,000 visitors to date. And so many of these visitors who now see New York as a leader in the field.

The second major result that came that came out from our Making Room analysis really shows the repercussions of failing to respond to these changing demographics. Today millions of people are having to share their home in some way in order to find some space in the city.  This is the alternative to a lack of suitable housing options – a culture of doubling up in shared housing is encouraged. It causes all sorts of other pressures on the local housing market and on the larger units in the area, allows no security for tenants, and leads to often illegal and dangerous living arrangements.

So we believe strongly that this project is an essential pilot to explore some new safe legal options for a booming population and one that is not going away but would otherwise be forced to rely on the Craigslist culture of informal doubled up housing. It is an incredibly green project – the most efficient way to live is in a small space in a dense building. And we believe that it allows New York to lead the way once again in the world in terms of housing innovation.