CHPC Policy Analyst Neil Reilly testified Monday, March 31, at a New York City Council oversight hearing on the City’s Build it Back program. He presented research that CHPC has undertaken regarding the ongoing effects of Sandy on housing citywide–namely the increased rates of foreclosure filings and sales of homes at prices well below the median of their borough. He also listed a series of policy reforms that CHPC believes will help return residents to their homes and rebuild affected neighborhoods. 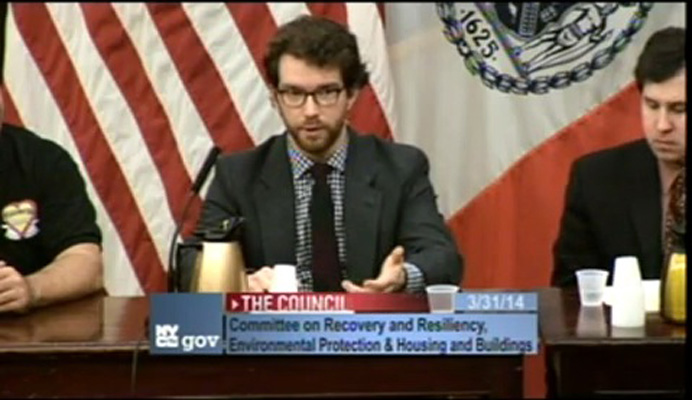 Council Member Mark Treyger, who represents parts of southern Brooklyn hit hard by the storm, including Coney Island, convened the meeting. Treyger chairs the Council’s new Recovery and Resiliency Committee and held yesterday’s meeting alongside the Committees on Housing and Buildings, chaired by Jumaane Williams, and Environmental Protection, chaired by Donovan Richards.

After opening statements from various elected officials, the hearing got underway with testimony from residents affected by the storm. Residents’ stories were the focus of the hearing, with Council members eager to hear reports of mismanagement by Build it Back and the unsustainable limbo many still find themselves in. The Council members then heard testimony from Amy Peterson, the new mayoral appointee in charge of the City’s Housing Recovery Office (HRO), which contains Build it Back. Along with representatives of HRO, the NYC Department of Housing Preservation and Development (HPD), and Office of Management and Budget (OMB), Ms. Peterson took two hours of questions from the elected officials ranging in topic from public contracts with service providers to the status of applicants to Build it Back. Following that panel, more residents and service providers relayed their experiences on the ground and dealing with various levels of government in their recovery efforts.

To read CHPC’s testimony, click here. Video of the entire hearing is available on the City Council website.